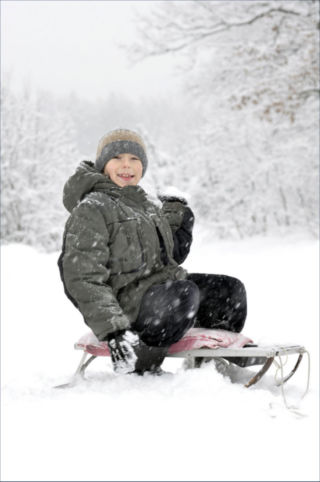 The sleek long-finned cars crept down our street like unsure skaters. They’d fishtail and spring from one slushy ridge to another, only to rediscover the haphazard snow-packed groove that other wheels had fought to lay before them. The fresh white blanket that smothered our street on December 24th was a sight to behold.

My neighborhood teemed like a trout-filled brook with giddy children whose imaginations were slightly larger than the snowmen they fashioned – kids who could not bear to ponder the consequences of heady questions like “Naughty or Nice”. And so we played. On sleds. And saucers. And with sturdy Tonka trucks that wouldn’t collapse under the weight of an Alpine avalanche! With reckless abandon…we played.

As morning courted afternoon, mom would strain to see her brood through the frosted storm door window, as small galoshes peeked around the aluminum frame from an outstretched hand that waved to find their rightful owner.

No self-respecting street-smart nine-year-old would ever take that bait knowing his soggy high-top Red Ball Jet sneakers might never escape the endless void of wet felted black molded rubber. Brother and sister – earflap to earflap, snow angel to snow angel…we were one.

Nineteen-fifty-seven.  We knew all about “duck and cover”. That was the moment you felt the resolve of a firmly-packed snowball. Our global conflict was a war of street numbers and the real winner was always the house with enough inventory to build a respectable snow fort.

Across the street a frail but feisty Mrs. Shaver cut a narrow swath along her sidewalk, barely longer than the length of her shovel. The octogenarian widow would work a little and sit a little longer – on the folding chair that became her trusted shadow. Offers of help? Graciously declined. Mrs. Shaver had grit.

As dusk descended on our little snow globe at 27th and Elm, the melting streams of blackened slush began to slow. Kids went home. Lights came on. And the endless string of twinkling glass bulbs in their sturdy sockets up and down our block told us Christmas time is here.

Inside - Cookies and milk…carols and stories…a tree with gifts…and a captivating poem by one Clement Clarke Moore ending just in the St. Nick of time to wish a merry Christmas to all - and to all a good night.